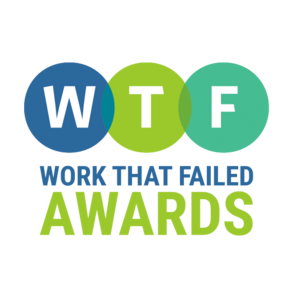 July 2019–The odds are most folks automatically affiliate the initials “WTF” with a less-than-polite phrase. Rest assured that’s NOT what it stands for as one of the most-appreciated awards given by the Center for Plain Language.

“It’s the ‘Work That Failed’ Awards and specifically ‘Work That Failed to communicate clearly,” says Jennifer Pearce, past Vice Chair of the Center. Before her tenure ended, Pearce hosted the presentation of the WTF awards at this year’s ClearMark Awards, the first time they were presented online.

The highly popular ClearMark Awards recognize the best in plain language communications created by North American organizations. These organizations run the gamut, from for-profit to non-profit, those with big budgets and those on tighter dollars. They’re also for all kinds of industries; e.g., law, government, health, technology, and any others with personnel who are trying to clarify complex lingo in their fields.

From Successful to Silly

WTF, though, is not only for people waging the right fight. “We also need to hold organizations and people accountable for work headed in the opposite direction,” says Pearce.

Amy Hasselkus, Executive Director of the Center for Plain Language, agrees. “The WTFs are a wonderful addition to the annual ClearMark awards. We always want to celebrate plain language, but sometimes you can’t ignore the ‘not so plain’ examples that are out there.The WTFs are a fun, engaging way to emphasize the need for plain language in all aspects of our lives.”

“The Center wants to play more of an advocacy role in that regard, pointing out stuff that’s not working as much as the stuff that is. So we decided to use it strategically throughout the year in a very public way,” says Pearce.

She points to a WTF award given after a terrifying event. Remember in Hawaii when the mistaken ballistic missile [was announced]? The Center put out an award at that time, saying this was a WTF.”

This year, attendees at the web event were given four options to vote on. Screen shots came up on the different items, each confusing in their own way. They included:

Pearce, who specializes in plain language in health communications, admits voting for the hospital chargemaster as the most incomprehensible. Hospitals were recently required to make their price lists chargemasters public.

“I think it was insulting to the consumers. By putting out the information in its raw form, using technical terms and medical abbreviations, the hospitals are basically saying, ‘You want prices? Here ya go.’ I think it deserved the WTF nomination because it failed to be actionable,” she says.

And the Winner is…

The polling disagreed, though. The overwhelming favorite was the first nominee, perhaps because everyone is confronted with such language.  “I think WTFs are also for people who feel they have no other option but to tolerate this, to say, ‘Actually this is unacceptable and I demand better,’” says Pearce.

“WTF is obviously a moment of levity and we all can laugh about the absurdity of these communications. But the more that the Center for Plain Language can act as a mouthpiece for people all around the country who are encountering content issues and experiences that aren’t understandable, the more the Center can serve in an advocacy role,” says Pearce adding, “After all, the Center’s mission statement says, we ‘champion clear communication so people and organizations can thrive.’”

NOTE: Have your own current favorite complicated wording? Pearce reminds us, “People think WTF is fun [so] we take nominations year ‘round. People can nominate through the Center’s website.” That’s simple: Center for Plain Language WTF awards. ####

About the Event Developer: The Center for Plain Language is a 501(c)(3) organization with the goal of helping government agencies and businesses write so clearly that their intended audience understands what they are saying the first time they read or hear it. The Center’s mission is to champion clear communication so people and organizations can thrive.