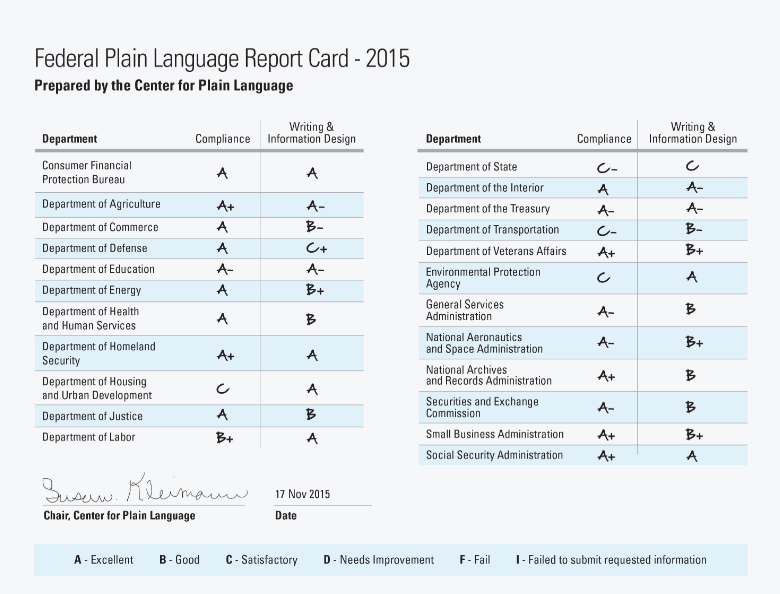 This year, the Center is taking a slightly different direction with our annual assessment of government writing: We are grading forms. Or should I say “We are grading Forms!!”—yes, this is exciting! (I don’t imagine, however, that all of the government agencies are as excited about this direction as we are at the Center).

Why are we grading forms this year? We see the clarity and ease of use of a form as a fundamental element of what the Plain Writing Act of 2010 is all about: communicating clearly with the public so people can comply with a regulation or obtain something they need. User-friendly forms represent an enormous opportunity to serve people with clear writing and document design. We will be grading the forms for the clarity of their instructions, for their ease of use, and for the visual layout and navigation. 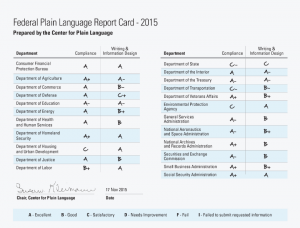 For those new to the Center, each year since 2012, we have issued a Report Card of letter grades (such as, A, B-, C+) for each cabinet-level agency in the executive branch and several other large agencies. We review a small sample of writing from each agency and assign a grade, publishing the whole list of agencies and grades in the “Federal Plain Language Report Card.” We will be reviewing the documents this fall and releasing the results in early January.

How do we pick and assess the forms? We want to review forms that have a high “public burden,” as the Office of Management and Budget (OMB) calls the level of effort expended on the form. Forms are assigned “burden hours,” and OMB multiplies that by the number of times the form is filled out annually to measure the overall burden of that form. We want to review forms that affect the public greatly, so we have asked agencies to choose one or two forms from among those with the highest total burden hours. Reviewers will grade the forms using pretty much the same criteria the Center uses to judge the annual Clearmark Awards.

What else is new this year? We are not issuing a “Compliance” grade. In the past we have assigned a grade for actual writing and a separate grade for how well the agency has complied with administrative requirements of the Plain Writing Act. We’ve looked at questions such as Does the agency have a Plain Language website? Does the agency offer training to employees in how to write in Plain Language? and several other factors. Last year, all agencies were fully compliant (a “C” or better), and nearly all earned “A” grades. We have therefore decided to grade compliance once every third year, the next time being 2018. I should point out that the Center’s decision not to grade compliance does not relieve the agencies of any requirement to report on their compliance efforts directly to Congress.

Although this review of one or two forms per agency is just scratching the surface, we hope the process will help plain language reps and agency leaders to look closely at all their forms in the process of identifying which to submit to us. And we hope to help increase the agency’s general sensitivity to this facet of the public service emphasis of the Plain Writing Act.

About the author: Dr. Chip Crane is a writing consultant and trainer in Washington, D.C., helping clients with plain language in career development writing, technical writing, office correspondence, and other workplace documents. Chip also teaches medieval literature and technical writing at the University of Maryland.