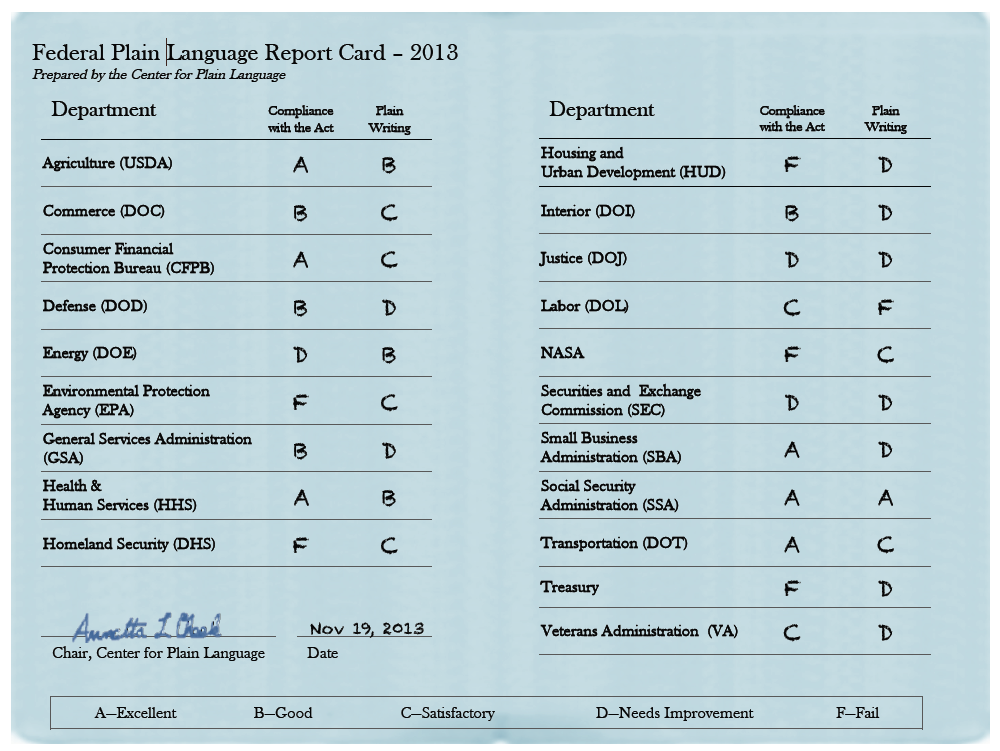 Plain language has been making headlines—in the world beyond health care!

Last week was report card time for federal agencies. The Center for Plain Language, a nonprofit volunteer organization based in Washington, D.C., graded 20 agencies and departments for compliance with the Plain Writing Act. President Obama signed the act into law in 2010, to little fanfare. It requires that government agencies use plain language in communicating with the public so citizens can understand forms and documents. (Did you know there was such a law?)

But even though there is no penalty for failure to comply with the law, the report card has gotten its share of media attention. That’s a good thing for those of us who believe that clear communication is vital to our ability to be engaged citizens—or patients. (In the spirit of full disclosure, I want to say that I serve on the board of the Center for Plain Language.)

As a former journalist, I am gratified to see news agencies doing their job as watchdogs. The Washington Post, NPR, Time, Federal News Radio, and Reuters are among the media outlets that have reported on the good, the bad, and the ugly since the Center released the report card last week. The report card includes two grades, one for how well the agency follows the letter of the law by meeting its requirements, and the other for how well the agency follows the spirit of the law by writing clearly. To sum it up, too many government agencies are not thinking about their readers.

First, some of the shining stars: The Social Security Administration earned two A’s. The Department of Agriculture scored well, too, with an A and a B. Among those who should face detention are the Treasury Department, which earned an F and a D, and Housing and Urban Development, which earned the same low scores.

If you wonder why this matters, just think about how often tax forms or mortgage papers or letters from a federal department or government rules have left you scratching your head. That confusion may only cause anxiety. Or, it may result in costly mistakes and more work for individuals and businesses that have to interpret federal rules and regulations. Clear communication is just as important in a democracy as it is in health care.

You can read the full report card here:
https://centerforplainlanguage.org/report-cards/2013-report-card/

Representative Bruce Braley of Iowa, who wrote the act that is now the law of the land, isn’t satisfied. “Until these grades are all A-plus, we’re going to keep holding bureaucrats’ feet to the fire,” he told Reuters. He also has introduced a new bill (HR 1557) that would require the full text of regulations to be in plain language. If you agree that citizens should be able to understand federal regulations, ask your representatives in Washington to support the Plain Regulations Act of 2013.