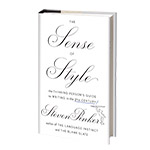 Reprinted from the Wall Street Journal with the author’s permission

Why is so much writing so bad? Why is it so hard to understand a government form, or an academic article or the instructions for setting up a wireless home network?

The most popular explanation is that opaque prose is a deliberate choice. Bureaucrats insist on gibberish to cover their anatomy. Plaid-clad tech writers get their revenge on the jocks who kicked sand in their faces and the girls who turned them down for dates. Pseudo-intellectuals spout obscure verbiage to hide the fact that they have nothing to say, hoping to bamboozle their audiences with highfalutin gobbledygook.

But the bamboozlement theory makes it too easy to demonize other people while letting ourselves off the hook. In explaining any human shortcoming, the first tool I reach for is Hanlon’s Razor: Never attribute to malice that which is adequately explained by stupidity. The kind of stupidity I have in mind has nothing to do with ignorance or low IQ; in fact, it’s often the brightest and best informed who suffer the most from it.

I once attended a lecture on biology addressed to a large general audience at a conference on technology, entertainment and design. The lecture was also being filmed for distribution over the Internet to millions of other laypeople. The speaker was an eminent biologist who had been invited to explain his recent breakthrough in the structure of DNA. He launched into a jargon-packed technical presentation that was geared to his fellow molecular biologists, and it was immediately apparent to everyone in the room that none of them understood a word and he was wasting their time. Apparent to everyone, that is, except the eminent biologist. When the host interrupted and asked him to explain the work more clearly, he seemed genuinely surprised and not a little annoyed. This is the kind of stupidity I am talking about.

Call it the Curse of Knowledge: a difficulty in imagining what it is like for someone else not to know something that you know. The term was invented by economists to help explain why people are not as shrewd in bargaining as they could be when they possess information that their opposite number does not. Psychologists sometimes call it mindblindness. In the textbook experiment, a child comes into the lab, opens an M&M box and is surprised to find pencils in it. Not only does the child think that another child entering the lab will somehow know it contains pencils, but the child will say that he himself knew it contained pencils all along!

The curse of knowledge is the single best explanation of why good people write bad prose. It simply doesn’t occur to the writer that her readers don’t know what she knows—that they haven’t mastered the argot of her guild, can’t divine the missing steps that seem too obvious to mention, have no way to visualize a scene that to her is as clear as day. And so the writer doesn’t bother to explain the jargon, or spell out the logic, or supply the necessary detail.

Anyone who wants to lift the curse of knowledge must first appreciate what a devilish curse it is. Like a drunk who is too impaired to realize that he is too impaired to drive, we do not notice the curse because the curse prevents us from noticing it. Thirty students send me attachments named “psych assignment.doc.” I go to a website for a trusted-traveler program and have to decide whether to click on GOES, Nexus, GlobalEntry, Sentri, Flux or FAST—bureaucratic terms that mean nothing to me. My apartment is cluttered with gadgets that I can never remember how to use because of inscrutable buttons which may have to be held down for one, two or four seconds, sometimes two at a time, and which often do different things depending on invisible “modes” toggled by still other buttons. I’m sure it was perfectly clear to the engineers who designed it.

Multiply these daily frustrations by a few billion, and you begin to see that the curse of knowledge is a pervasive drag on the strivings of humanity, on par with corruption, disease and entropy. Cadres of expensive professionals—lawyers, accountants, computer gurus, help-line responders—drain vast sums of money from the economy to clarify poorly drafted text.

There’s an old saying that for the want of a nail the battle was lost, and the same is true for the want of an adjective: the Charge of the Light Brigade during the Crimean War is only the most famous example of a military disaster caused by vague orders. The nuclear accident at Three Mile Island in 1979 has been attributed to poor wording (operators misinterpreted the label on a warning light), as have many deadly plane crashes. The visually confusing “butterfly ballot” given to Palm Beach voters in the 2000 presidential election led many supporters of Al Gore to vote for the wrong candidate, which may have swung the election to George W. Bush, changing the course of history.

How can we lift the curse of knowledge? The traditional advice—always remember the reader over your shoulder—is not as effective as you might think. None of us has the power to see everyone else’s private thoughts, so just trying harder to put yourself in someone else’s shoes doesn’t make you much more accurate in figuring out what that person knows. But it’s a start. So for what it’s worth: Hey, I’m talking to you. Your readers know a lot less about your subject than you think, and unless you keep track of what you know that they don’t, you are guaranteed to confuse them.

A better way to exorcise the curse of knowledge is to close the loop, as the engineers say, and get a feedback signal from the world of readers—that is, show a draft to some people who are similar to your intended audience and find out whether they can follow it. Social psychologists have found that we are overconfident, sometimes to the point of delusion, about our ability to infer what other people think, even the people who are closest to us. Only when we ask those people do we discover that what’s obvious to us isn’t obvious to them.

The other way to escape the curse of knowledge is to show a draft to yourself, ideally after enough time has passed that the text is no longer familiar. If you are like me you will find yourself thinking, “What did I mean by that?” or “How does this follow?” or, all too often, “Who wrote this crap?” The form in which thoughts occur to a writer is rarely the same as the form in which they can be absorbed by a reader. Advice on writing is not so much advice on how to write as on how to revise.

Much advice on writing has the tone of moral counsel, as if being a good writer will make you a better person. Unfortunately for cosmic justice, many gifted writers are scoundrels, and many inept ones are the salt of the earth. But the imperative to overcome the curse of knowledge may be the bit of writerly advice that comes closest to being sound moral advice: Always try to lift yourself out of your parochial mind-set and find out how other people think and feel. It may not make you a better person in all spheres of life, but it will be a source of continuing kindness to your readers. 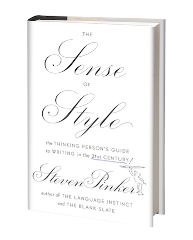 — Mr. Pinker is Johnstone Professor of Psychology at Harvard University and the chairman of the Usage Panel of the American Heritage Dictionary. This article is adapted from his book “The Sense of Style: The Thinking Person’s Guide to Writing in the 21st Century.”