USDA Gets an “A;” VA Gets an “F” on First Plain Writing Act Report Card Released Today by the Center for Plain Language

Washington, DC – The U.S. Department of Agriculture received an “A” and the Veterans’ Administration received an “F” on the first Plain Writing Act Report Card released today by the Center for Plain Language, a nonprofit organization dedicated to clear communication in government, business, non-profits, and universities. 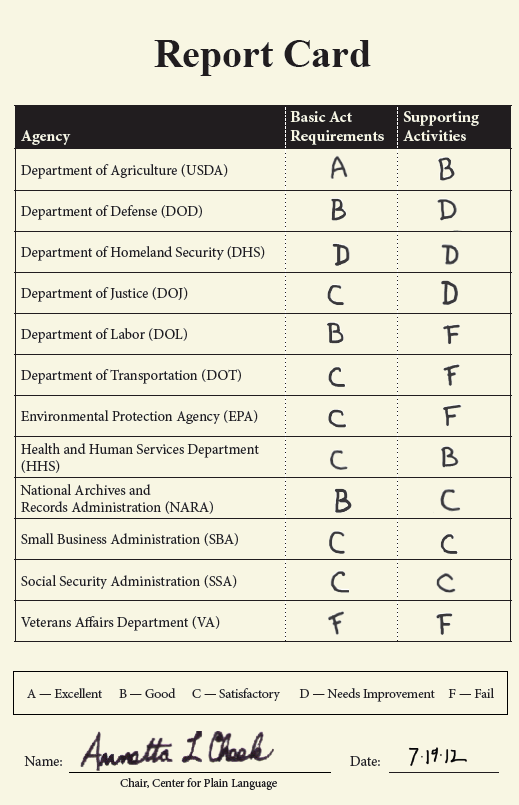 The report card was released a year from the date when the first requirement of the Plain Writing Act went into effect–July 2011. Ultimately, the Act asks government agencies to take steps to assure that they are communicating clearly with businesses, consumers and other stakeholders.

The Plain Writing Act Report Card tracks the progress of how well agencies are following the Act. The author of the Act, Rep. Bruce Braley (IA-01), spoke on the telephone news briefing today where the report card grades results were released.

“Unless federal agencies are held accountable, they won’t implement the changes required by the Plain Writing Act,” Rep. Braley said.  “The mixed results of the first-ever Plain Language Report Card show that we still have a long way to go to make government forms and documents simpler and easier for taxpayers to understand.  Some federal agencies have embraced the Plain Writing Act, and others haven’t. Until these grades are all A-plus, we’re going to keep holding bureaucrats’ feet to the fire.”

The report card includes two scores for each agency. The first score is based on the specific requirements in the Plain Writing Act and was determined by the Center for Plain Language. The second score identifies elements that reflect whether agencies are undertaking a variety of supporting activities addressing the “spirit” of the Act. For the second score, the Center worked with PLAIN, the federal plain language group,

“This first Plain Writing Report Card helps ensure that government agencies are following both the letter and the spirit of the Act,” said Annetta L. Cheek, PhD, chair of the Center for Plain Language. “We hope to make this an annual event where we grade different agencies each year.”

Specific agency report cards and criteria for the grades are available.