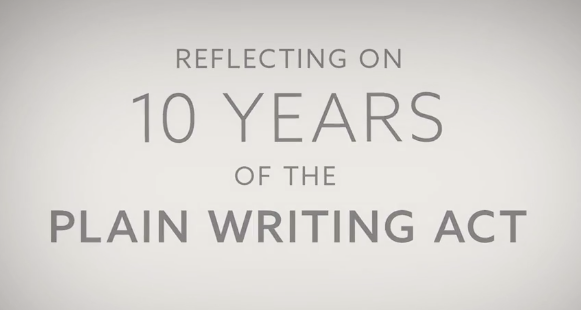 The Plain Writing Act is turning 10 years old on October 13, 2020. The Act gave U.S. federal employees the legal oomph to turn the stereotype that government writing is overly complicated, stilted, and obtuse on its head. No longer was plain language just a good idea that could easily be tossed aside for lack of time or tacked on the end of a project as if it were synonymous with proofreading. Plain language was the law.  Government now had the responsibility to ensure a reader could find, understand, and use the information it provided.

Reflecting on 10 Years of the Plain Writing Act (video)

As co-chair of the federal plain language working group PLAIN from 2011 to 2019, I saw the dramatic impact the Act had across all sectors of the government. Changing the culture of how an organization communicates doesn’t happen overnight, but over the years top plain language techniques permeated letters, websites, forms, and instructions. Agencies even began testing documents with real customers and using the feedback to tailor communications to those they served. While not every agency is an ace at clearly communicating, there has been a significant improvement over the past ten years. Those who embrace plain language have reaped the benefits such as higher compliance rates on instructions; fewer customer service calls; and improved customer satisfaction scores.

Of course the Center played a pivotal role in getting Congress to pass the Act with the dedicated advocacy from its founding members. In 2012, the Center began the Federal Plain Language Report Card to gauge agency compliance with the Act. The Report Card has been a great motivator to keep agency plain language efforts strong. At first grades started out on the lower end of the spectrum, but last year nearly half of the graded agencies received A’s in compliance.

Today, the Plain Writing Act continues to make a difference in the lives of people seeking information from the federal government. Because we can’t celebrate in person this year due to the COVID-19 pandemic, I asked fellow plain language advocates to share a virtual shout out to the Plain Writing Act from home. Thanks to everyone who sent in images of past ClearMark winners, training materials, and video testimonies.

Happy birthday, Plain Writing Act of 2010! Thank you to all the federal employees keeping plain language a priority for government communications. 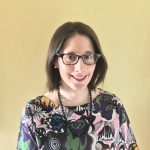 Kathryn Catania is on the board of the Center for Plain Language. She has over 15 years experience advocating for clear federal communications. Kathryn loves traveling to PLAIN and Clarity conferences. With travel on hold this year, she’s been part of the Access for All Planning Committee.

Reflecting on 10 Years of the Plain Writing Act (video)

[Excerpts from February 2008 testimony to the House Small Business Committee]

Joanne Locke: In 1998, when I first started to convince my colleges at FDA to use plain language because the president telling them to do so. I got a lot of skeptical looks. There had been so many futile attempts to improve government writing in the past. Then, finally, after working for six years with three different congresses, the Plain Writing Act passed in 2010 and the president signed it. Now I could point to an actual law and the reaction and the improvements were noticeable.

David Lipscomb: I’m David Lipscomb. I lead the federal report card. That means I get to work with judges like Ginny Redish and, of course, Annetta Cheek, the famous pitbull trainer who fought so hard to get us a law. Now every year when Annetta grades on their writing, I can watch, check in, to see how the law is doing. If it’s really making a difference. Of course, Annetta is never going to be perfectly happy, but I know she sees the difference.

Thousands of federal employees trained in plain language and hundreds of new advocates across the government. And god only knows how many people have been rescued from jargon, hidden verbs, passive voice, and big blocks of text. It’s a great law. Thank you to all of you who fought so hard for it.

Miriam Vincent: I’m Miriam Vincent and I’m with the United States federal Plain Language Action and Information Network. The other PLAIN. I remember, very well, when it was actually signed there was a lot of excitement and a lot of energy in Lisbon. It took a lot of us by surprise. So when the news hit there was a lot of talking and whispering “Oh my, did you hear that?” and “Wow, look at what just happened.”

The most dramatic change was the change in our training and our focus. And the website is now supporting the agencies so that they can comply with the act instead of convince everybody that plain language is a really great idea.

Andrea Sanchez: Hi, my name is Andrea Sanchez and I can say that the Plain Writing Act is as relevant as ever.

On a personal level, I can say as an English second language or non-native English speaker things are, things that are written in a plain language help me and my family to be able to communicate a little bit better. I can look at a form, read a form to my mother, or any other family member, and they are able to understand it. And I’m able to understand it so that I can relay that information to them. So I definitely appreciate all of the work that goes into plain language. And my hat is off to all of those plain language warriors that take time to and have a true commitment to plain language.

Ginny Redish: Hi, I’m Ginny Redish, long time plain language consultant, trainer, [and] advocate. It’s very exciting that we now have the tenth anniversary of the Plain Writing Act. For those of us who’d been teaching and advocating for plain language for decades, it’s really exciting to see how the community has grown. Not only in the United States, but globally. I will look forward to at least another 10 years. In fact, to many, many more years of ever increasing plain language.

Cynthia Bauer: Hello, I’m Cynthia Bauer. I’m the director for health literacy in the School of Public Health in the University of Maryland College Park. I’m very happy to celebrate the 10 year anniversary of the Plain Writing Act because it’s clear, simple, direct, and has a great purpose. I think we can all agree that the world needs more plain writing.

Joe Kimble Hi everybody. I’m Joe Kimble. A few reflections on the Plain Writing Act of 2010. I was one of Annetta’s minions. I was the legal minion. Whenever a congressional staffer had some kind of legal question, I would get a call from Annetta to say that she had referred them to me. I remember one call, I tried to answer his questions as best I could but I still remember the indifference in his voice was palpable. Bennet later lifted his hold on the bill, but only after we added some weasely wording to the definition of plain language. We had to add some bit about “follows best practices appropriate to the subject or field.” The definition in the original bill was much smoother. But sometimes, you don’t have a choice. Back in 2006, during the early efforts on the original bill, I was one of three persons who testified for the House subcommittee on regulatory affairs. Anyway, the reception on that day was much more positive. But it still took four more years and the introduction of a second bill. As we all know, the credit goes to Annetta. I was just one of her minions.

Kathryn Catania: Hi, I’m Kathryn Catania and I can’t believe that the Plain Writing Act is 10 years old. It seems like just yesterday that I was at the Center for Plain Language’s October 13, 2011, workshop on implementing the Plain Writing Act. And the most exciting part of that entire event was Congressman Bruce Braley bringing the actual act. And it was framed and we all got to see it and celebrate with him and Dr. Annetta Cheek, the powerhouse behind getting the entire act passed. So it was a really exciting event.

There are so many great examples of how the Plain Writing Act helps improve government communications across all sectors. Whether it’s helping someone understand a loan estimate, avoid scams, or if they’re eligible for a benefit, plain language works. And for 10 years, the government has been taking it seriously. And you can tell by the increasing grades on the federal plain language report card and the winners of the ClearMarks. Now, I don’t know what the future holds, but the Plain Writing Act is going to get better and help more people. Because I know there are so many enthusiastic and determined new plain language advocates out there. And the sky’s the limit, as they say. So I encourage everyone to keep up the fantastic work.