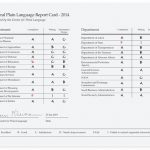 The Federal Report Card process for 2015 is underway! Agencies are preparing their submissions for the Center’s review. This relatively new service by the Center (since 2012) continues to evolve, and this year we are making a couple of changes to the process.

The US Government recently invited designers and developers to redesign the patient health record. The goal of the Health Design Challenge was to improve the presentation and usability of the record currently used by the Department of Veterans Affairs (VA) and other groups. Over 230 entries were submitted. The winning entries used dynamic content, informative […]

How well are federal agencies adhering to the Plain Writing Act? The Center for Plain Language is issuing a “report card” grading several federal agencies on how well they are implementing the Act. The results will be released at a telephone news briefing on Thursday, July 19, 12 noon, featuring Rep. Bruce Braley (IA), the […]