How did the Center begin? 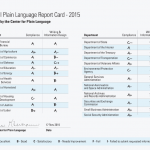 This year the Center is taking a slightly different direction with our annual assessment of government writing: We are grading forms. Or should I say “We are grading Forms!!”—yes, this is exciting! (I don’t imagine, however, that all of the government agencies are as excited about this direction as we are at the Center).

I’ve spent the last few months working on the 2014 Federal Plain Language Report Card. The Report Card evaluates whether U.S. Federal Departments comply with the Plain Writing Act of 2010. This year we also analyzed writing samples against best practices for both writing and information design.